Integral Without Borders Sangha Call ThriveAbility - A Dynamic, Integral Way to Create a Thriving World in the 21st Century

The next Integral Without Borders Community Call will be on April 12th, 2014 on the ThriveAbility - A Dynamic, Integral Way to Create a Thriving World in the 21st CenturyAs you may know, our intention with these IWB sangha calls is to co-create the kind of 'integral community' we want, one that is deep and wise in its content, supportive in its interpersonal connections, and world-centric (even kosmo-centric!) in it's moral embrace. Each call will focus on an aspect of integral practice in development with certain practitioners leading on these topics and with participants contributing examples from their integral projects.Saturday, April 12th, 2014, 9-10:30am Pacific Time.

(Find your time zone here).Register: If you intend to attend, please be sure to drop us an email, so that we know you're intending to be on the call and also so that we can send you the audio clip afterwards.How: The conference call line is a North American number, but it can be accessed by calling the number via skype.Conference Dial-in Number: (605) 475-4810Participant Access Code: 988715#Price: For now, while we fine-tune these sangha calls, they will be by donation. Go here for donations and to read more about the call. Thank you! We appreciate your support.Topic: The call will be on the ThriveAbility - A Dynamic, Integral way to Create a Thriving World in the 21st Century. Dr Robin Wood is a renowned strategist, futurist, communicator and agent of transformation. He has spent 3 decades working at board level with the world’s leading organizations in 35 countries on 4 continents. He is deeply skilled in designing and catalyzing major shifts in large scale systems, and in inspiring & empowering the teams that deliver them. His mission is to catalyze and support leaders, organizations and innovations that co-create a thriving global future. He has been a member of IWB since our very first event in France in 2006. Read below for more context about this topic.

ThriveAbility
A Dynamic, Integral Way to Create a Thriving World in the 21st Century

By Robin WoodOur planet and our species have had an increasingly rough ride in the first dozen years of the 21st century. We have belatedly woken up to the fact that we are living on borrowed time and resources, and that the reckoning for our spending spree in the second half of the 20th century is now becoming due. While sustainability advocates have been campaigning for half a century to get us to reduce our impact on our planet, they have failed to motivate the mainstream to shift their thinking and habits toward more sustainable, healthy lifestyles and policies.There are several reasons for this, though the main one has been that environmentalism and sustainability have positioned themselves as killjoys and fanatics who care more about “nature” than they care about people. While their anger at the damage and destruction we are wreaking on our precious biosphere is understandable, it is also counterproductive. We need to move from impact reduction to thrival maximisation.ThriveAbility is a response to the failure of sustainability to turn our ship around before we hit the iceberg. Its focus is on what motivates people to change, by providing them with a clear cut logic and set of incentives for doing so. Given that governments and NGO’s are often last in line when it comes to their ability to change, Witness the Rio+20 gridlock. The focus of ThriveAbility is on innovators, entrepreneurs, businesses and enablers in governments and NGO’s who are able to work well in partnership with the business community to make things happen. 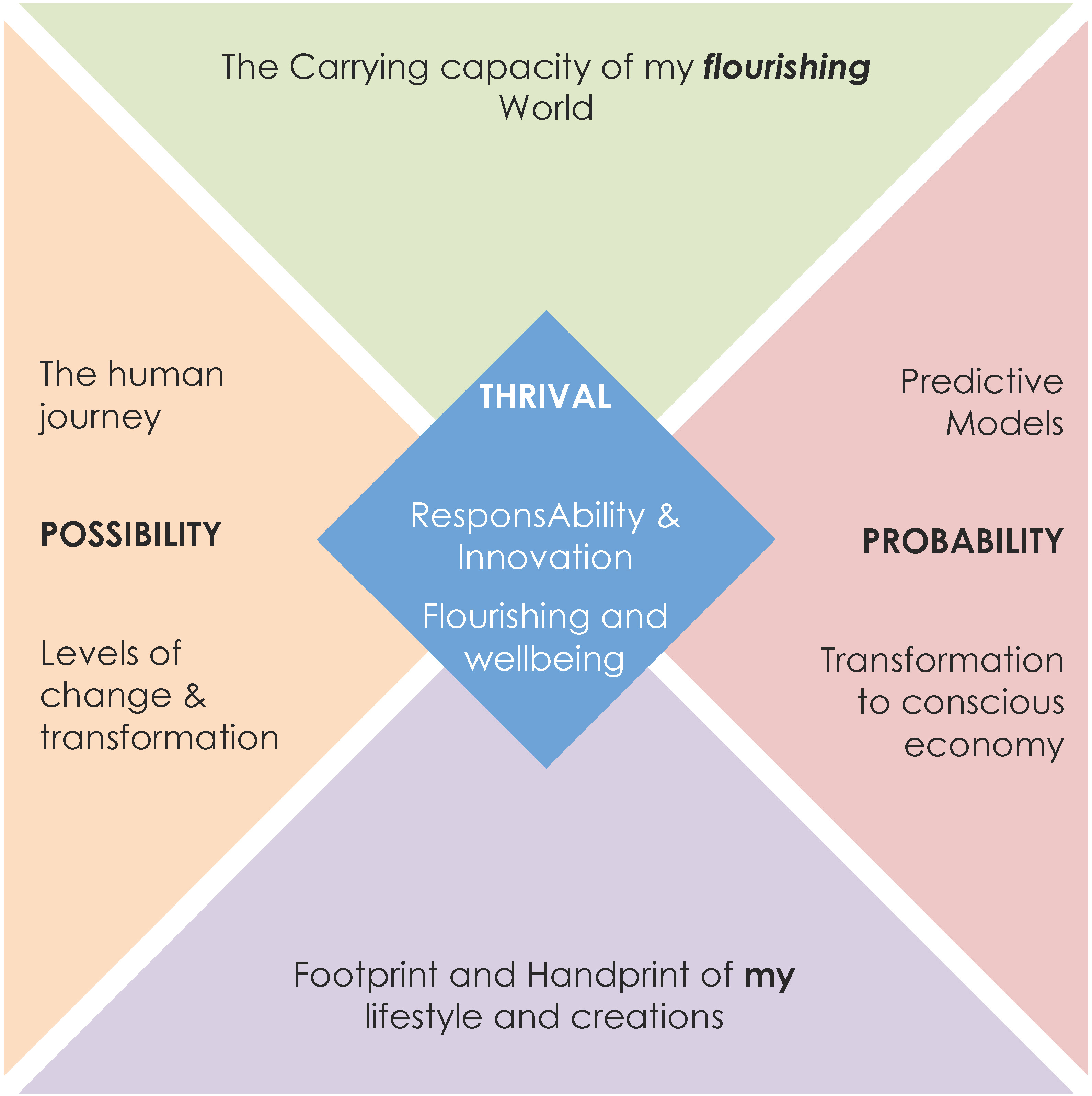 What makes ThriveAbility different? At its core, ThriveAbility brings a whole systems, integral approach to large scale change based on a synthesis of top down and bottom up ways of enabling shifts to emerge when and where they are required. Creating sustainable value through sustainable innovation requires us to:1. Recognise and align the very different value systems and priorities motivating people and organizations to move toward ThriveAbility, to  create coherent, effective initiatives.2. Reframe the relationship between nature, technology and human psychology so that we see ourselves in new ways and gain insights into the unique role we each play as leaders in the shift from surviving in a merely sustainable world to thriving in a flowering, global second Renaissance.3. Redefine three fundamental relationships between sustainability to wellbeing, innovation to personal development, and happiness to a thriving society, within in the context of the “Thrival Equation.”4. Prioritise and invest our time, energy money and resources into initiatives, projects, programs and businesses that maximise the Thrival Equation. 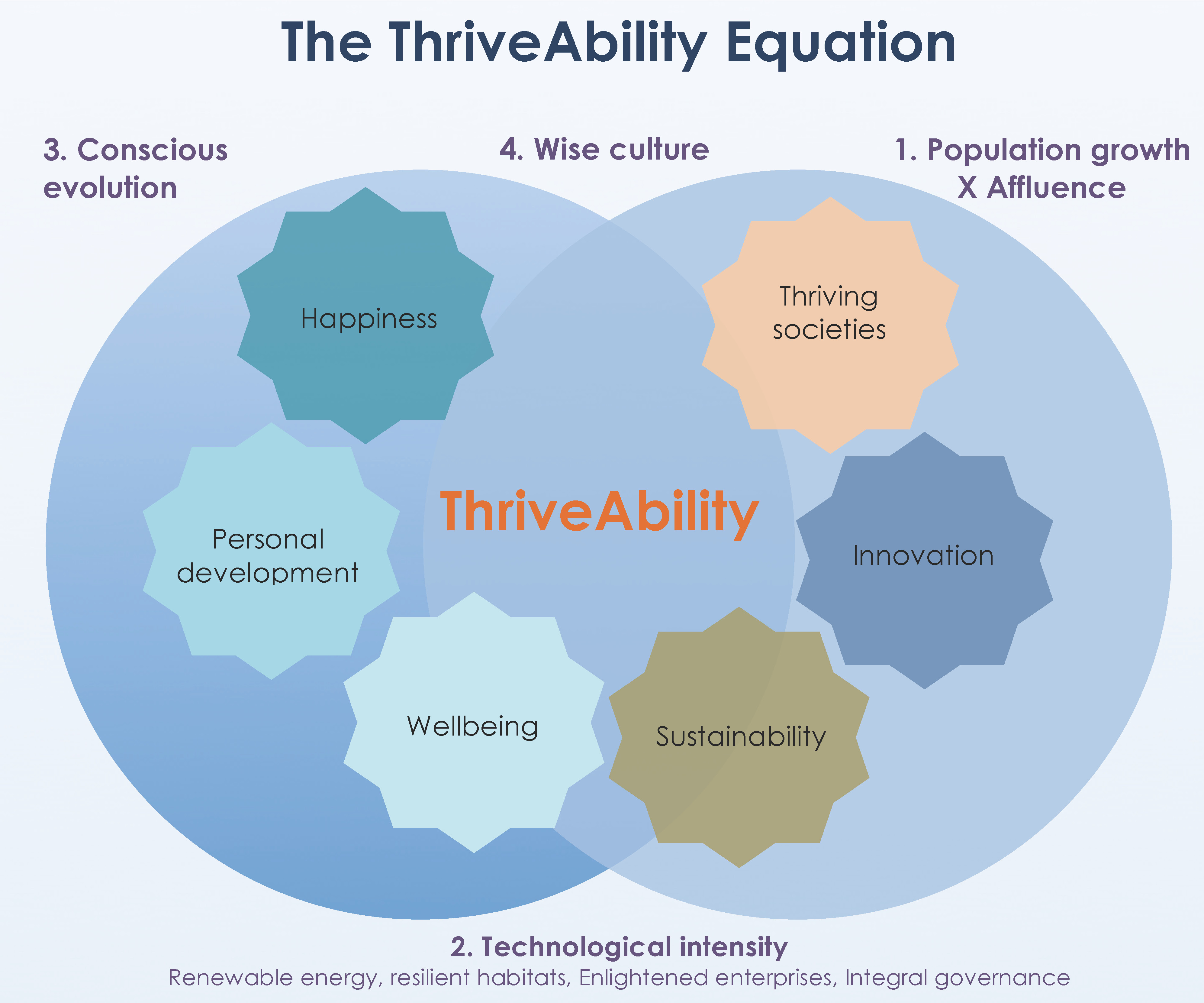