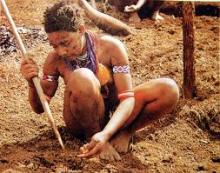 (Thoughts for the Integral Without Borders Meeting in Istanbul, 2010)

I want to try and make explicit how I tend to assess a development context – for myself as well as anybody foolish enough to read this.  I am an economist with a passion for economic history; so I tend to look first at the economic context. This usually enables me to come up with various hypotheses. It helps that the techno-economic base seems to be the most important determinant of the average level of consciousness in a society. Still, others may find it useful to start elsewhere.

My first goal usually is to find the national social center of gravity and the direction of change. In the process of zeroing in on this I also begin to construct the unique AQAL map of the country.

Don’t laugh! But my broadest framework is this: In terms of the “frothy edge” of evolution, the transition from (magenta) foraging to (red) horticulture started in Mesopotamia about 10 000 years ago. The transition from horticulture to (amber) agriculture (with an ox and plough) started, again in Mesopotamia, around 6 000 years ago and both spread. Agriculture reached England (or Kosmic habits took hold) about 1000 years later, around 3000 BCE.

The transition to (orange) industrial society began in England about 4500 years after that (some say triggered by the horse drawn plough in terms of the LR), around the 14th Century. It gained speed around the 16th Century, crystallized during the 19th Century, and is spreading.  North America and Oceania (receiving migration and the orange mindset from Europe) were among the first to follow Europe. Russia was dubbed the “late industrializer”. It was followed by the nations of South America, Eastern Europe, and some in the Far East via the Import Substitution policies of the 1960s and 70s. Japan took off in the latter part of the 20th Century; with the NICs close behind. More recently China and India are going through a rapid transition into the orange industrial age. The (green) computer based information technologies (or the digital revolution) began in North America and Europe at the end of the 20th Century and is also spreading.

So: In terms of the global leading edge we are in the midst of a transition from orange industry to green digital/informational technologies and its affiliated AQAL configurations. (Or, equivalently, the transition from an orange worldview to the green with its affiliated AQAL configurations, as folks of the leading edge proceed to build a world after their own image.) The global dominant mode of discourse is rapidly transitioning to green, while global governance structures are in a flux. Meanwhile we have quite a patchwork of economic and more generally AQAL configurations around the world. Our task, it seems to me, is to weave these together.

In terms of individual societies it is worthwhile to start with history too. Historically, horticulture began with wooden implements and aligned with egocentric worldviews and tribal organization. Agriculture began first with wooden ploughs, transitioned to metal ploughs, and aligned with lord-peasant relationships of various sorts, ethnocentric, mythic-membership worldviews and feudal empires. Industry, the harnessing of inorganic energy, aligned with world-centric worldviews, wage-labor relationships of various sorts, and nation states. These broad alignments are still relevant today. I notice that I differentiate the economic structure of a country on the basis of dominant sector, technology and especially these relations of production.

First a detour to delineate the tech-econ line: Historically, as agriculture transcends and includes (or better yet: “transcends and integrates”) foraging and horticulture, it brings in metallurgy to both – i.e. metal implements: arrows, hoes, etc.  It also brings in lord-peasant relationships (e.g. hunting on the Lord’s land is prohibited or is taxed.) Similarly, as industry transcends and integrates agriculture it brings in new technologies to foraging, horticulture, and agriculture (e.g. guns, greenhouses, tractors, harvesters, industrial irrigation systems, etc.,) as well as various wage-labor arrangements. This is akin to reshuffling the content/integrating the enduring capacities of earlier stages in individual development.

In other words, not all agriculture is a sign of amber social center of gravity (LR governance structures and LL dominant mode of discourse) even when it is a dominant sector. We see these types of orange integration in countries that have solid orange social centers of gravity – in North America, Europe, and Oceania. To my mind these are part and parcel of life in a country where the average level of consciousness is at orange, even though there will be folks with individual centers of gravity across the spectrum.

In countries that are transitioning, the situation is much more complex. There you will have pockets of (green/orange) manufacturing and mechanized agriculture conducted with wage labor, along with agricultural production based on sharecropping arrangements with a wealthy landowner (transitional relations of production) or outright amber peasant-lord relationships, oftentimes using the good old ox and plough, as well as small holder subsistence farmers or amber artisans. In a lot of countries you will also have tribal groups, conducting foraging and horticulture perhaps with relatively new implements, but old (tribal) relations of production. The economic structure and relationships of a country in transition can be a really complex (and colorful) patchwork. Nevertheless, the most dynamic sectors, the dominant production technologies used and, even more importantly, the relations of production tend to be indicative of the average level of consciousness in a society. (And in some instances, as Don Beck seems to have found in South Africa, there can be deep fractures and a dual social center of gravity – magenta and orange in his case.)

While each country by now has pretty much every sector production as well as a full spectrum of individual centers of gravity, the average level of consciousness will be drawn to the social center of gravity and the types of issues these countries face will be very different. Mature industrial countries leave folks behind in a very different way (urban slums, the so-called “unemployables” or underclass;  industrial pollution, overdevelopment; spiritual ennui, breakdown of communities; orderly culture wars reflected mostly in election results etc.) than rapidly industrializing countries (marginalized subsistence farmers, landless peasants, urban squatter settlements of potential industrial workers, industrial child labor, girls’ education, indigenous populations under pressure, pollution from old industrial technologies, resurgence of fundamentalisms, ethnic strife etc.); which differ from those trying to establish an amber social center of gravity (urban poor with little hope of formal employment as in Nairobi or Lagos, lack of markets/demand, general rural poverty, deforestation for firewood or slash and burn horticulture, violent culture wars, etc). Income and asset distribution issues are likely to be especially acute in countries transitioning to orange.

After I get a sense of the economic base, the range of relations of production, and the types of issues a country faces, I postulate a social center of gravity, which also includes a direction of change. The next thing on my agenda would be to assess the political structures. That there may be a parliament or elections – historically the trait of orange industrial societies-- often does not convey a whole lot to me. I am sure a political scientist would find much more in the political structures and relationships of any given country. But frequency of military coups, dictatorial takeovers or dominance usually signals either rapid and/or troubled change (Noriega, Pinochet, Marcos, the Shah, USSR, China – amber to orange plus international politics, of course) or revolving tribal affiliations (as in most of Africa – red to red or red to amber and back.)

I next try to get a sense of the specific dominant mode of discourse in the LL. I have found secondary level history and/or civics text books to be of immense value. What are the (hoped for) shared values and citizenship principles and how does a country communicate these to youngsters at amber to early orange? You will see a lot of green threads in e.g. US textbooks – diversity, multiculturalism, admission of “guilt” for various historical acts etc., and more exclusively amber nationalism and myths of becoming a nation in developing countries. Religious sermons would also give an indication of the worldviews and value structures of a community. Next would be to read the country’s intellectuals, especially newspaper columns and editorials. This will give me a sense of who are at the leading edge and how they articulate the issues the country faces. To get a broader felt-sense of the LL, I will read novels and watch movies, noting the perspectives of the authors/directors carefully. These also help in identifying the unique cultural traits/surface structures embedded in the AQAL structure.

In sum: All this enables me, first, to get to the national center of gravity and a national direction of change. The nation is a crucial category because it is still the unit in which laws and policies are implemented and the dominant mode of discourse holds sway. In some countries (e.g. in Africa, Afghanistan) it may not be a relevant unit of analysis, but that also gives a huge amount of information – usually about the predominance of red tribes. Secondly, these begin to give me some specifics about the unique AQAL configuration of the country: the specifics of the dominant mode of discourse (LL), the broad economic structures (LR), including the relations of production, and the political structures (LR). Novels, movies, opinion pieces, sermons begin to give a sense of how various individuals make meaning as well as reveal unique cultural traits. How I proceed from there would depend on the specific findings and the specific project at hand. I would likely dive deeper to local levels, to complete the analysis for the sequence of world-nation- province-community.

Notice that all this is still a very rough construction of the specific AQAL configuration at this stage, but, I would argue, a reasonably good beginning to get a handle on the context. Having a solid sense of the broad AQAL context in 3p terms in turn would assist in dialogical endeavors, allowing one to compare how various folks see this context from their own Kosmic address. Each encounter would then help refine the unique AQAL map, etc., etc.

I would love to hear how others approach an AQAL context.

Some pictures below, just for fun, (being also a partial delineation of the tech-econ line):